After nearly six years since “Lemonade,” Beyoncé’s latest album “Renaissance” gives longtime fans a fresh, new sound that will surely get them moving. The upbeat record blends disco and house music, proving that Beyoncé has no limits when it comes to creativity and innovation.

Beyoncé sought to celebrate and pay tribute to the Black, queer roots of house music. Additionally, Beyoncé said she created this album as a means to make others happy again aft

er a difficult last three years. Beyoncé said that the COVID-19 pandemic brought isolation to many people and that this album will allow people to feel loved and free. In a note posted on Beyoncé’s website, Beyoncé revealed that the album was not only dedicated to her children and husband, but to her late, gay cousin “Uncle Jonny” who battled HIV. As evidenced by her influences, “Renaissance” isn’t just another one of Beyoncé’s works, but has many themes tied to it, such as love, family and freedom.

The dance-pop anthem and lead single “BREAK MY SOUL” features background vocals from the artist Big Freedia. The lyrics “I’m ’bout to explode, take off this load / Spin it, bust it open, won’t ya make it go” showcase Beyoncé’s strength and resilience while also empowering listeners with a modern and uptempo beat.

While “CUFF IT” doesn’t quite have the same energy as “BREAK MY SOUL,” it remains another highlight of the album. With this track, Beyoncé goes more toward her usual sound of R&B and Pop.

Overall, “Renaissance” is a unique experience that allows listeners to freely express themselves. Beyoncé took a risk with this album, experimenting with different sounds and ideas such as house and disco music. Her efforts clearly pay off. 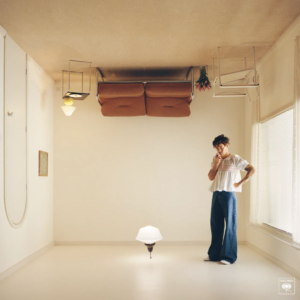 Courtesy of Columbia Records and Erskine

The whimsically warm sounds of the summer emanated from Harry Styles’ newest album released May 20. “Harry’s House,” Styles’ third solo album release since One Direction’s separation in 2016, brought a summer pop sound to his discography.

Although “As It Was” was Styles’ only single off the album to be released before the full album release date, fans also had a chance to enjoy his newer tracks during his Coachella performances in April where he performed “Late Night Talking” and “Boyfriends” for the first time.

“Late Night Talking” features an array of trumpets and trombones, which is a newer sound Styles is bringing into this album. In “Boyfriends,” he slows the tempo down with an acoustic love song dedicated to boyfriends all over the world.

The ‘Rock Lady’ of Ocean Point