”In your highest moments, be careful, that’s when the devil comes for you!”:


Warriors’ superstar Stephen Curry took it to Twitter to discuss the event at the Oscars, talks about Denzel Washington instead

Tonight was a very eventful night. After the long day of March Madness, we got our Final Four for both men’s basketball. Next weekend, we will see Kansas take on Villanova, and Duke battle UNC for the first time ever. For women’s basketball, we got two teams that made it to the Final Four, and the other two we shall find out tomorrow.

However, what happened during the evening overshadowed everything. During the 94th Academy Awards, Chris Rock got smacked by Will Smith on-stage. Rock made some distasteful comments about Jada Smith and her medical condition, and Will Smith did not tolerate the same.

UNCENSORED WILL SMITH FOOTAGE AS SHOWN ON AUSTRALIAN TV pic.twitter.com/NcRfdjWxqe

Also Read: “Hey Joe Lacob, get daddy some big men, or I take away your water!”: NBA Twitter reacts as Stephen Curry shows up with Ryan and Canon to watch Duke vs Arkansas

Stephen Curry, just like countless others, saw the same, and could not contain himself from reacting to the same.

Tonight was a big night for Stephen Curry. The documentary named ‘Queen of Basketball’ which he was an executive producer, along with Shaquille O’Neal, won the Oscar.

QUEEN OF BASKETBALL has won the #OSCAR for Best Documentary Short Subject!

The documentary is about Lusia Harris, the first woman to be officially drafted by an NBA team. It was executive produced by Shaq & Steph Curry. pic.twitter.com/cVSDOTO43Z

He celebrated the same by putting a story on Instagram about it. 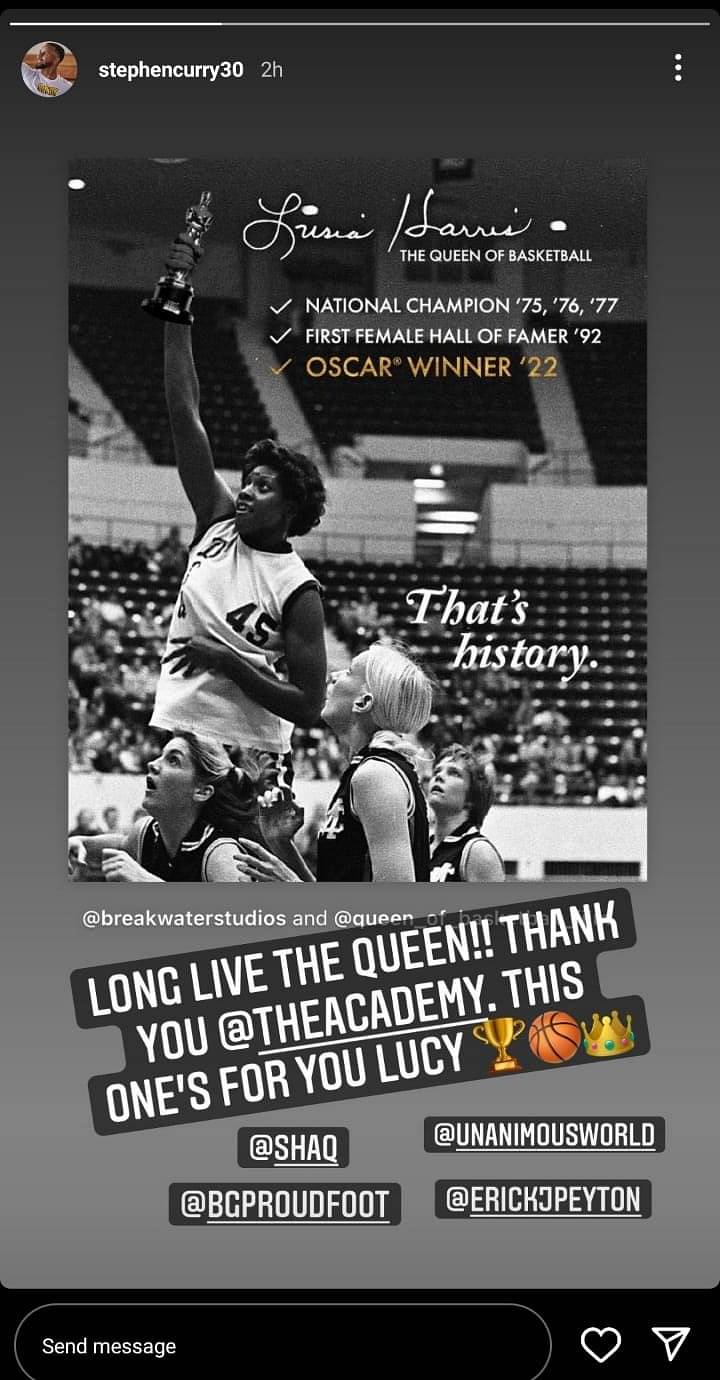 Curry also celebrated Stanford Women’s Basketball team taking down Texas with a comment on the Will Smith-Chris Rock situation.

This was loud!!! Like that slap on that other channel 👀 https://t.co/y7dudEWsAQ

Steph also did not want a great Denzel Washington quote to get buried amidst all the drama.

Like everybody..I’m still in shock about the whole thing- but in all the unnecessary drama, at least we got the line of the night from Denzel…”In your highest moments, be careful, that’s when the devil comes for you!” 📢

Also Read: “A lot of motherf**ckers need what Will Smith did to Chris Rock”: Damian Lillard backs the ‘Best Actor’ winner for slapping Rock at this year’s Oscars

Well, I guess just like a lot of athletes, Steph does not condone violence, but wasn’t totally against what Will Smith did. Chris Rock crossed a line, and deserved what came at him. However, Steph chose to focus on his childhood hero Denzel Washington, instead of getting caught up, delivering a statement on the drama.


Read More: ”In your highest moments, be careful, that’s when the devil comes for you!”:

Everything We Know So Far About Robert Zemeckis’ Graphic Novel Adaptation