Bad blood? Zayn Malik unfollowed Gigi Hadid amid her rumors of dating Leonardo DiCaprio. The “Pillow Talk” singer unfollowed his former girlfriend after their daughter’s birthday party and once rumors started to circulate that she was dating the Don’t Look Up star.

Pop culture news account PopFaction pointed out on September 23, 2022, that Zayn just unfollowed Gigi, who he dated on-off for six years before they finally broke up in 2021. A quick look at his Instagram account and you can see Zayn follows just 24 people on his account, half of which are fan accounts dedicated to himself. The model, however, still follows her ex. The two are said to be on amicable terms since they both co-parent their daughter, Khai, 2. They recently reunited at a birthday party that Zayn threw for their daughter’s second birthday on September 19, 2022. Gigi posted a birthday cake for her little one on her Instagram story. She captioned the story, “Our angel girl turned 2 today.” She tagged Carlos Bakery who made the Peppa Pig-themed birthday cake and she also tagged her ex-boyfriend Zayn. She also raved about the birthday her ex threw for her by captioning one picture of the party with “her baba threw her the best bday party !” 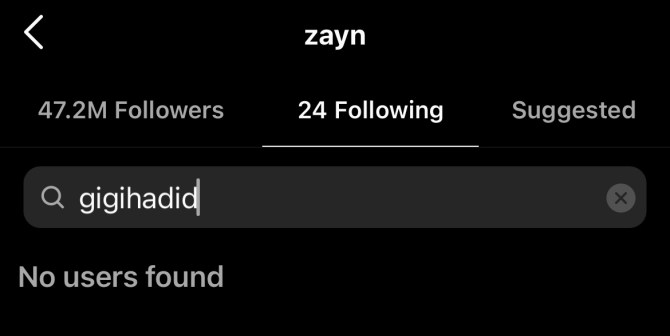 Gigi and Zayn dated on and off from November 2015 to October 2021.  A source told People on October 28, 2021, that Zayn and Gigi broke up as a result of his physical fight with Gigi’s mom, Yolanda. “They are not together right now. They are both good parents though,” a Hadid family friend said. “They co-parent. Yolanda is of course very protective of Gigi. She wants the best for her daughter and grandchild.” On Father’s Day 2022, Gigi posted a faceless picture of Zayn with Khai and wished him a “Happy Father’s Day.”

A source confirmed to Entertainment Tonight on September 14, 2022, that Leo, 47, and Gigi, 27 are “dating.” “Gigi and Leo are dating and into each other,” the insider said. The model and actor were seen together for the first time at Casa Cipriani in New York City on September 10, 2022, where they “looked very flirty.” “They were sitting in the dining room area and were canoodling and having a fun night out with each other,” the source said. Another source told Entertainment Tonight that Leo “likes” Gigi but wants to take it slow with her. “He likes her, but things are still new,” the insider said. “He has also been hanging out with his guy friends since his split from Cami.”

Leo was previously dating Camila Morrone from 2017 to August 2022. “Leo and Camila have had a few breaks in the past few months. It’s a matter of deciding whether they are in it for the long haul or just going to let it die,” a source told In Touch Weekly. “With all of Leo’s girlfriends, once she became focused on work and had her own priorities, he got distant. Rather than have dramatic breakups, they…